Home Articles At the end of May

At the end of May

Today is the 1st June and as the vegetation in the forests gets high the orienteering season for many of the leading British runners passes from a domestic focus to an overseas one. Most of the big domestic competitions (the "major events") have been run, and the first senior international races, in Finland, are next weekend. That is World Cup Round 1, which also includes a sprint relay in the centre of Helsinki the following Tuesday The weekend after is Jukola and Venla. These relays have a record entry of over 20,000 this year - the organisers attribute it partly to the "growth ... of fitness orienteering". In early July, test races for the World Champs take part, after which the British team will be selected. The World Champs themselves are forest disciplines only, in Norway in August, just after the Scottish 6-Days. And then, with more of a sprint focus, there are World Cup Round 3 (September, Switzerland) and 4 (October, China).

These races were on open moorland in Yorkshire on 5th May. Unlike the JK it was not very warm.

The British Champions for 2019 are Alasdair McLeod and Megan Carter-Davies. Neither is a stranger to big wins, but both are first time winners of a classic length British Championships. Alasdair was the 2018 JK Champion. Megan had won the JK earlier this season, the British Nights in 2018, the British Middles in 2017, and the JK Sprint in 2018 and 2019.

The lead organising club for the whole championships weekend was Airienteers (Leeds, Bradford, Airedale, Wharfedale). The weekend also included the Sprint Relay and the British Relays. Full results for all the weekend's competitions

These were in Southern England at Easter - it was warm.

The overall titles are decided on the sum of the times for day 2 (the World Ranking Event middle distance) and day 3 (the long).

In the men's Chris Smithard won, just 7 seconds ahead of Peter Bray, with Will Gardner a further 21 seconds back.

In the women's, one-two was Megan Carter-Davies and Jo Shepherd. Megan was a small margin behind on day 2, but was over three minutes quicker on the long race. Jo was in turn 22 seconds ahead of third-placed Cecilie Andersen. We don't have a page for Cecilie, but we know she is last year's British Middle Distance Champion and ran at JWOC in 2017 - coming 20th in the sprint and 34th in the long.

Jo, Megan and Cecilie together after the JK long race (credit Iain Shepherd)

Towards the end of the hottest ever February in Britain, Mar Orienteering Club organised the British Night Champs at Muir of Dinnet. M21 was won by Graham Gristwood, and W21 by Fay Walsh.

The Scottish Champs were run in Dalbeattie Town Wood in south-east Scotland by Solway Orienteers on 25th May. There were many paths, but also a lot of thick mainly spruce forest little visited by people - final details warned of danger to the eyes.

We weren't sure how trophies were awarded but via Twitter we heard (thanks Claire). There are, splendidly, three trophies -

In M21 Ben Mitchell, who runs for the Welsh club Swansea Bay was first, ahead of second Will Gardner (who runs for the English club Octavian Droobers) and third was Jamie Stevenson (who is Scottish and runs for the Scottish club Forth Valley.)

In W21 Megan Carter-Davies, who is Welsh and has Scottish qualification from her Mum was first, a minute and a half ahead of Hollie Orr, who grew up in Scotland but now runs for her local English club Lakeland, and Sarah Jones who is a contemporary of Megan's, running for Lakeland as a W18, but has since run with the Scottish clubs Edinburgh University and Edinburgh Southern.

The Northern Champs were held at Wharnecliffe in Yorkshire on 10th March. The terrain was partly sloping rocky woodland and partly moorland - the courses were mainly in the woods.

Peter Bray won M21, ahead of Will Gardner and Ben Mitchell. None of them run for a Northern Club (although Peter has recently been a member of Manchester & District) and the northern trophy went to Philip Vokes of Deeside Orienteering.

These were the Sunday race of "Springtime in Shropshire", on Brown Clee Hill. M21 was won by Duncan Birtwistle and W21 by Nadine Wright. Both are members of Octavian Droobers and so are Midlands Champions.

The assembly was in a sports stadium, with the courses going off into nearby woodland, passing back through the arena, going round a school and finishing round the top bend of the athletics track. There was a steam railway in sight, and a grandstand for spectators.

This was a lovely event with quite some atmosphere, nicely set out at Bradford University.

Edinburgh University "Legends" - Fay Walsh, Alistair Masson, Sasha Chepelin and Zoe Harding took the win, nearly two minutes clear of the sprint finish for second, which was won by Grace Molloy for Forth Valley "Fliers", a second ahead of Cecilie Andersen for Bristol "A". Grace's teammates were Lizzie Stansfield, Chris Smithard and Peter Molloy. Cecilie's were Chloe Potter, Tom Dobra and Adam Potter. 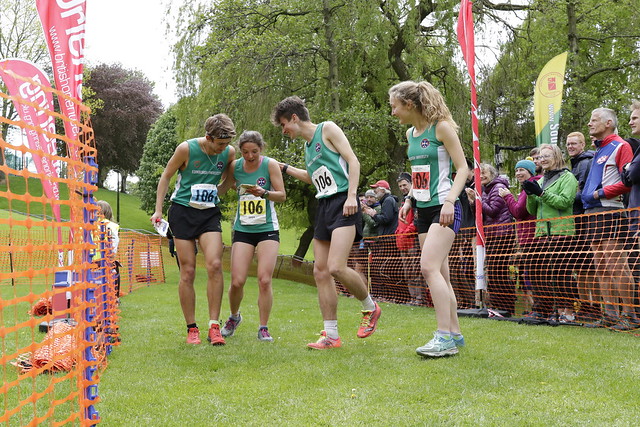 Zoe Harding is congratulated by her teammates after finishing, Photo: by Wendy Carlyle.

The rest of the year in the UK?

British Team for World Cup Round 1