The World Championships (WOC) reached the Czech sandstone terrain for its final races. Thursday 8th July, late on, it was the Forest Relays. Next day it was the classic (or "long") races. With three minute start intervals and 80 minutes (women) 99 minutes (men) target winning times, the event goes on a long while. There wasn't therefore much gap between the relays and the classic races.

Six British athletes took part these two days. On Thursday the British women, Grace Molloy, Jo Shepherd and Megan Carter-Davies, ran well for 7th. The men, Peter Hodkinson, Hector Haines and Ralph Street, were 15th. All of them have had at least one top-6 in this event before, so we think it is fair to call that result disappointing.

On Friday all but Peter ran the classic races, the blue riband races of the Championships. There is an entry quota based on the results of recent World Champs which gives Britain places for two men.

The Classic Races were long, tough and technical. There was an outstanding run by Megan Carter-Davies to sixth place. Grace finished twenty-fifth. With starts in reverse order of World Ranking, and most of the 59 runners ranked above her, Grace started early. Her good run meant she occupied the current leader's chair for quite some time. Jo, who had done just that the last time there was a WOC long, finished thirtieth. In the men's race Ralph was eighteenth and Hector thirty-second.

Countries enter one team in each of the men's and women's races. The British men have had three top-6 (highest 4th) positions in the previous five WOCs (and a 15th and last time a 19th, their lowest ever position.) The British women have had two top-10 positions (highest 7th) in the last three years.

The relays were late in the day, as in Norway in 2019, to maximise the size of the TV audience. In tougher terrain and with perhaps more gaffling than in other years the runners spread more. The women's race had three gafflings (and the men had four), including one using "false common" controls, before the run-through, and then another one afterwards (not on final leg.) Use was also made of an artificial out-of-bounds, marked in the terrain. And the weather was wet, very wet. 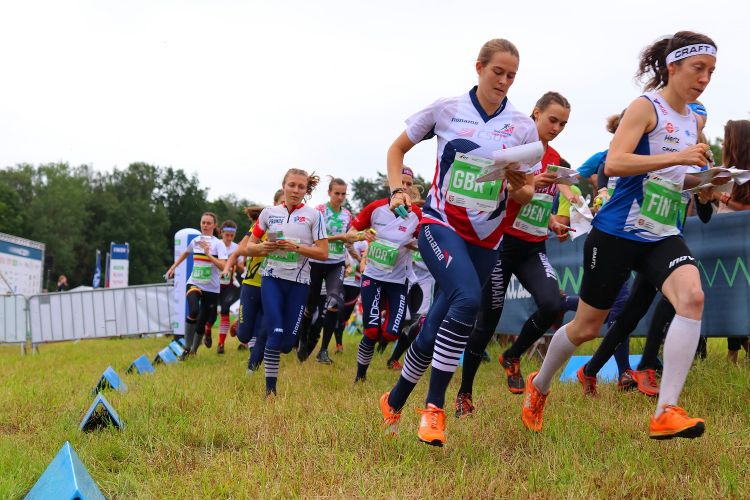 Grace Molloy at the start of the relay. photo: Fred Härtelt

The women's race was first. Grace had a strong leg 1, coming back in the middle of ten leading teams spread over two minutes. On leg 2 Sarah Hagstrom had a very strong run to establish a three and a half minute lead for Sweden - with Tove Alexandersson on last leg. And with the Swiss in second after two legs and Simona Aebersold on the last leg that was the first two decided. The Czech, Neutral (Russia), Finland and Norway teams were in the race for third, with a spread of three minutes. On leg 3 Andrine Benjaminsen overtook the others so Norway took bronze. Jo and Megan ran GB to 7th, which equalled the 2017 result as the best since the last "podium" in 2014. Slightly unexpectedly it was not Finland who were ahead, as Megan passed their runner, but Poland, who got their highest ever position in this event.

The men's race was second. And the conditions were getting worse. 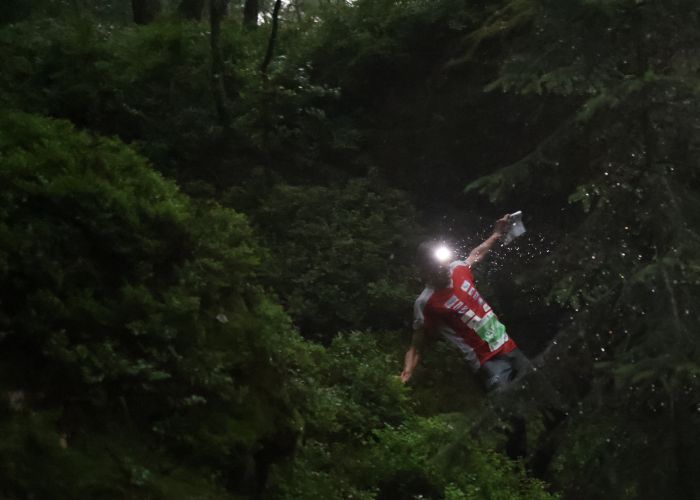 Headlamps were in order for several last leg runners. On the TV you could clearly see the SI cards flash at controls. And the pictures were interrupted for about 15 minutes by an electrical storm - well done the commentators for talking with only GPS and split times as prompts. Some runners' map bags "broke", and the map printing became unclear. After the race there was humour about the introduction of Night Orienteering to the World Champs.

As with the women's race, ten teams came back within two minutes after leg 1, but it was not the usual countries heading the group: it was Ukraine, Finland, France and Poland. Echoing Sarah Hagstrom's run in the women's race, Kasper Fosser was over a minute quicker than anyone else on leg 2 to take the lead for Norway. The Swedish and Swiss second leg runners pulled their teams up to 3rd and 5th, and their final leg runners, Gustav Bergman and Matthias Kyburz (the silver and gold medallists from the middle), then took their teams to gold and bronze. Eskil Kinneberg kept Matthias at bay so the silver went to Norway. 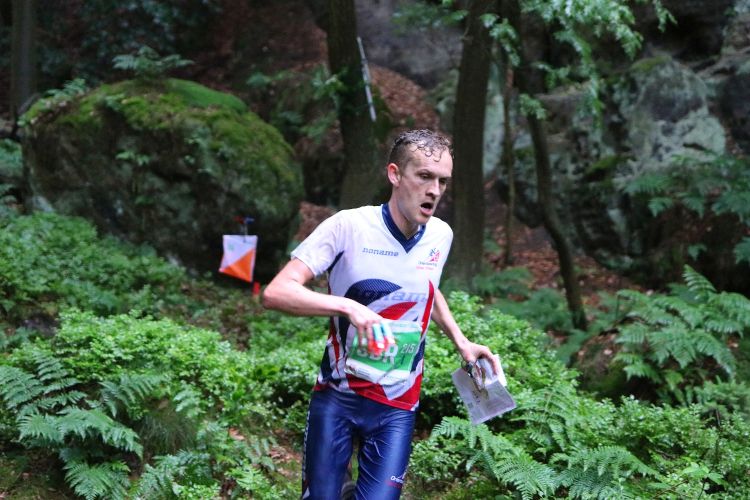 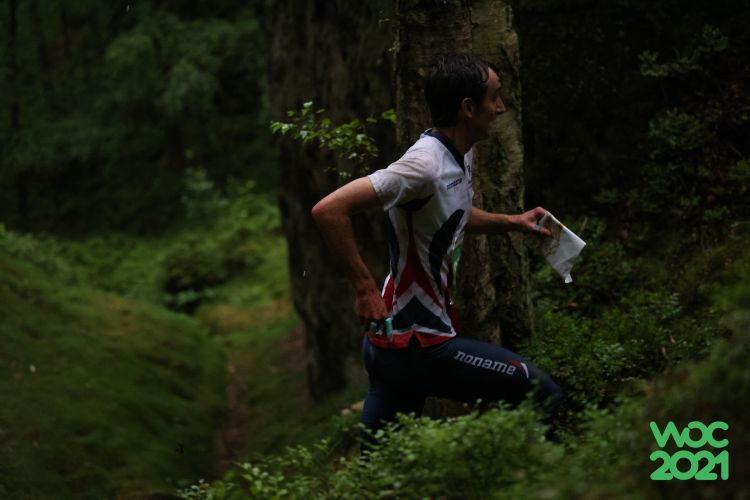 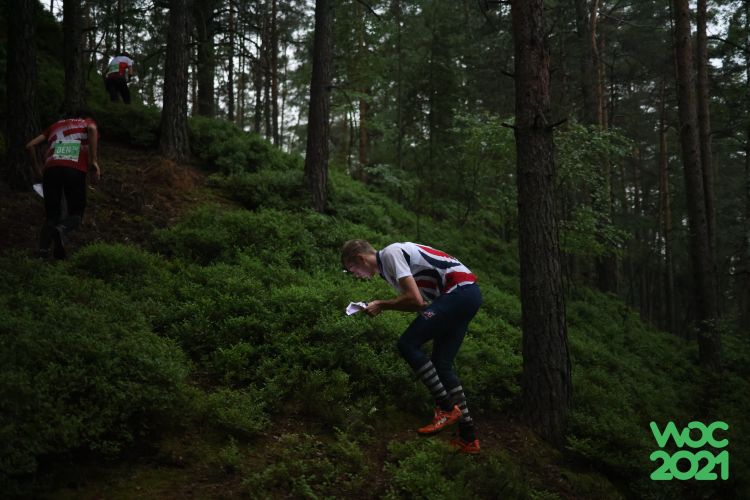 All the relays at WOC2021 were won by Sweden, with Switzerland and Norway taking the other two medals.

The classic races are intended to be about endurance running and route choices, and these were right on target with excellent planning on terrific terrain. Both the womens and mens races had significant long legs that offered route choices which turned out to be key factors in how successful runners were.

There were clear winners of both races, from the top athletes of the Championships: Tove Alexandersson (Sweden) and Kasper Fosser (Norway.)

In the long Kasper was the strongest physically, took good routes on the decisive legs and did nothing to lose significant time. He went fast on the very long leg to control 2 such that on his better route on the next long leg to control 5 he picked up the two runners who had started in front of him (Matthias Kyburz, his "3-minute man", and Magne Daehli, his "6-minute man"). And that group (or "train") took the three medals. They gained significantly on another big route choice leg to control 15 (passing Vojtech Kral and Leonid Novikov), and they rarely slipped time. There is top-notch highly illustrated analysis of both races from Jan Kocbach at World of O.

There was subsequent discussion in the orienteering social media about the "Fosser Train" because it decided the bronze medal. Magne Daehli took this rather than Daniel Hubmann, and the situation left neither of the two very experienced athletes feeling very happy. Daehli was nearly 4 minutes down on Hubmann at control 4 before the locomotive arrived. Hubmann did make mistakes, notably the route choice to control 15. Daehli did steer the train on the last loop after the coaches(!) in the arena had shouted the position, but no doubt the train did decide the medal.

The World of O analysis shows how few trains actually occurred: they were not significant in the women's race and in the men's only the Fosser trio and Daniel Hubmann picking up Miika Kirmula mattered for more than half the course. The formation of a train during a long leg is not at all common, normally they happen in middle distance situations where the runner in front has to slow for navigation. So this one was a fluke, not a typical outcome, and half the men's top-30 ran wholly or almost entirely on their own. The way the starts are decided based on World Ranking you have to be very good yourself to start 6 minutes ahead of Fosser or, indeed, any of the top runners (§)

(§) except when a top runner starts early because of lack of ranked races e.g. Fosser in WOC 2019 (when he was still a junior).

There's a great illustration of this particular race available on Winsplits, as the platform has chosen to show "Pack Running" as an example of what Winsplits Pro offers. 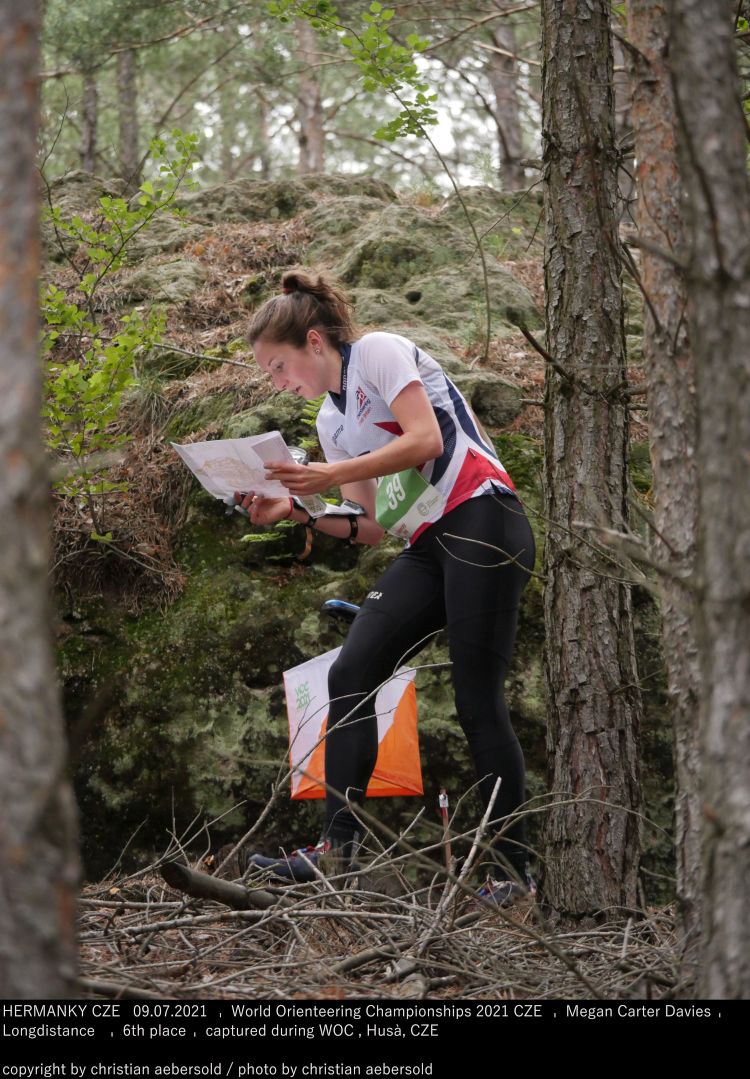 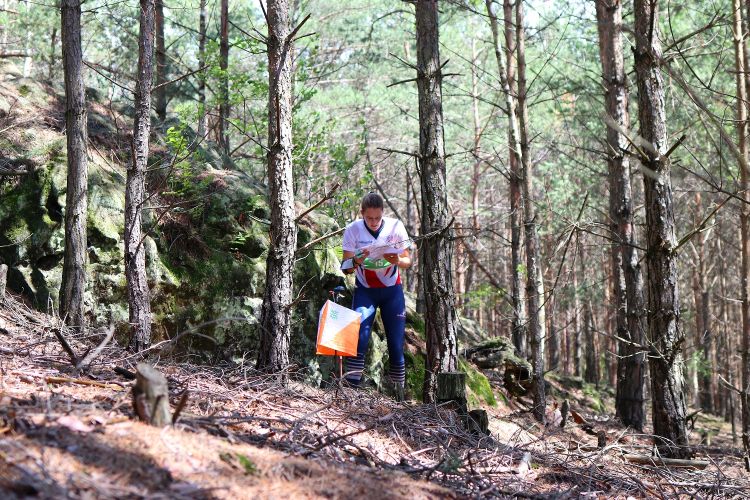 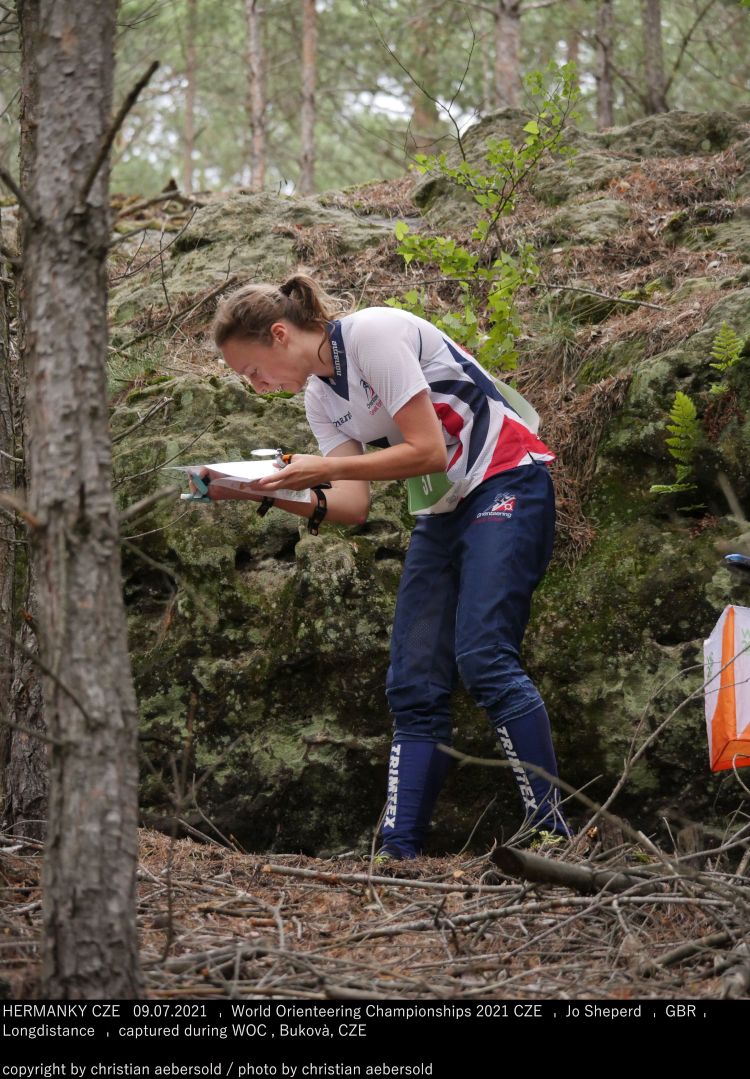 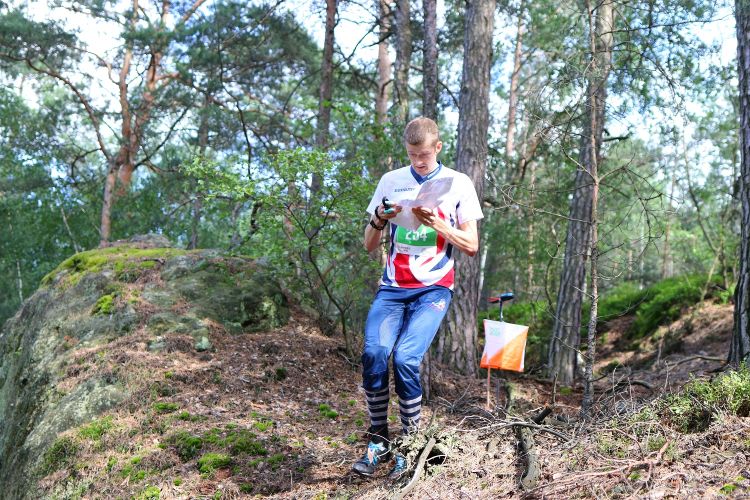 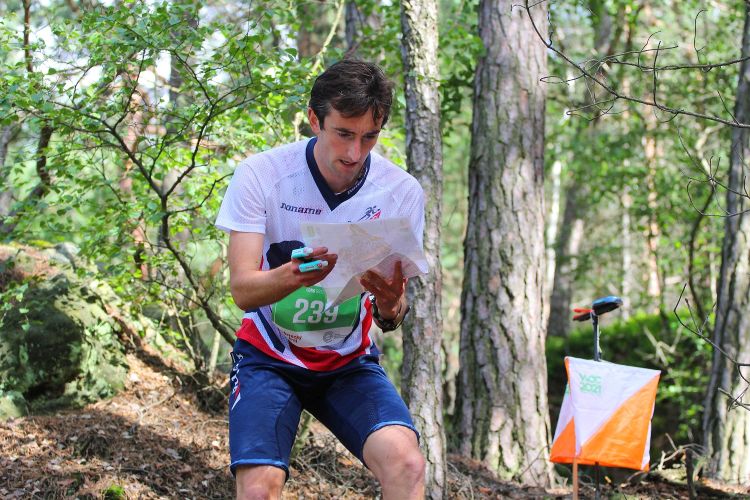 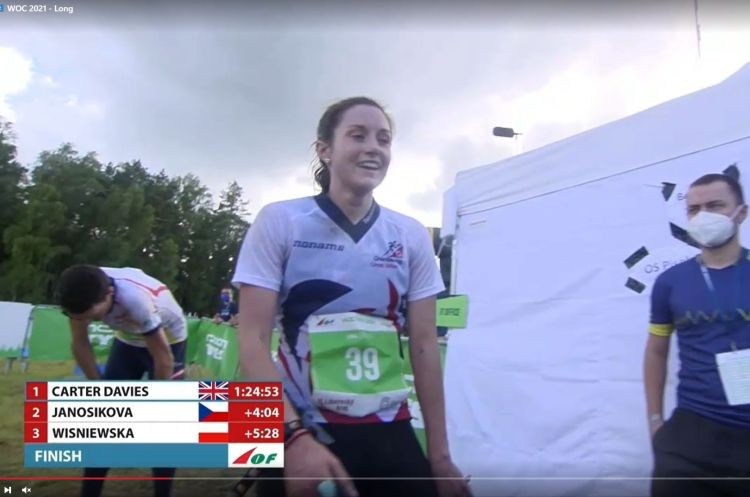