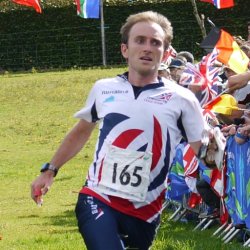 Graham won the first championship race after the 2020 COVID break, the British Middle Distance, in June 2021. He has since won the 2022 British (Classic) and the British Nights.

Graham left the squad at the start of 2019 so as to avoid any potential clash with his role as (Volunteer) Technical Director for the 2022 World Champs which will be held in Edinburgh. He continues to be available for forest selection. And indeed he was selected and ran the long (classic) forest race and the relay in the 2019 World Champs in Norway.

Graham is presenter of the sport's main introductory video "Think Fast, Run Hard, Start Orienteering" that was produced by South London Orienteers and published in early 2019.

The highlight of my international career is probably my Gold medal from the WOC relay in 2008 and I have now competed in 14 WOCs. I have been pleased over many years of top level orienteering to have given advice and guidance to help many of the GB team members. I started out with Mole Valley OC and the South-East Junior Squad, and have since run in UK with Octavian Droobers and Sheffield University. I now live in Dunblane and run with Forth Valley. I have had a wide range of experience with international clubs: I won Swedish Relays Champs with Södertälje-Nykvarn in 2012, and subsequently became coach for IFK Moras OK. Now I run with the Finnish Club Kalevan Rasti who have had tremendous success over a number of years winning Tiomila and Jukola.

Including the British Middle Champs Sept 2019 I have 15 Senior British Champs Gold medals. I have competed for the British team at the Mountain Running World Champs.

I have drawn orienteering maps since leaving university, and now work as an Events Manager for Ourea Events.