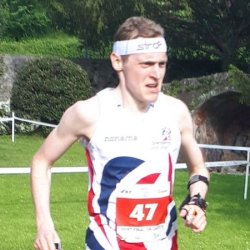 I am a runner and orienteer who loves racing over any distance and any terrain. In 2018 I won the Scottish Cross-Country Champs, gained a team Silver as the second GB finisher at the European Cross Country Champs in the Netherlands, and took the bronze medal at the European Orienteering Champs Sprint in Switzerland.

(And in 2019 won team gold at the European Cross-Country Champs in Portugal, being GB's third counter.)

I am based in Dundee. I was born and raised in Swansea, and my first exposure to orienteering was with Swansea Bay Orienteering Club. I soon followed my brother into the Welsh Junior Squad, pushed on by sibling rivalry. My first Junior Home Internationals (JHI) for Wales found me near the bottom of the results. However, after going on tour to Lagganlia with the Junior Regional Orienteering Squads, I later won the JHI.

I went to Sheffield Hallam University and whilst there, contributed to several maps and events in and around Sheffield. After a brief stint in Loughborough, I moved on to Scotland where I am now a member of Forth Valley Orienteers. I would describe myself as a runner with a main competitive focus in orienteering. I have represented Wales on the road and cross country and GB on the track and I have British Championship medals on the hills. I run for Lillomarka Orienteringslag, from Oslo Norway, in international club competitions.