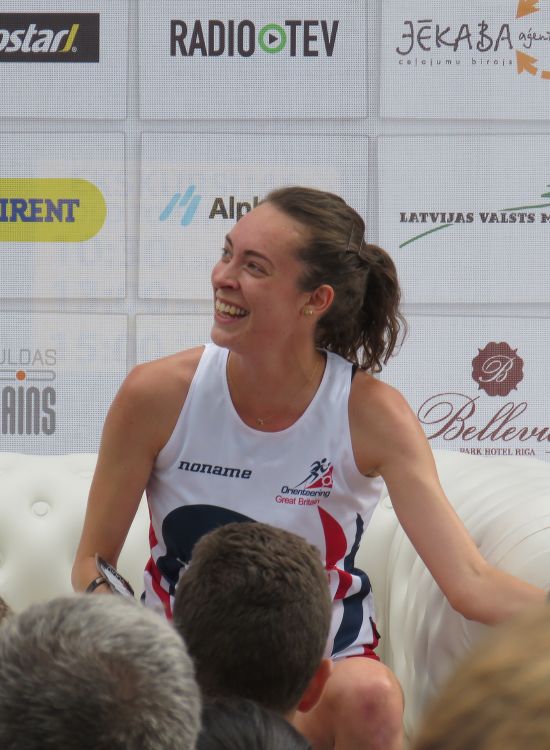 On The Red Line editorial. On Saturday 4th August, after qualification races earlier in the day, the World Champs (WOC) Sprint Final took place in Old Town Riga, Latvia, and Alice Leake, the current British Women's Sprint Champion, came eighth. Alice made her WOC debut three years ago, and in previous years was 35th, 22nd and 22nd. She said on Twitter "8th in the world. What is even happening." It was the highest position by an individual British athlete at the 2018 World Champs. It's the fifth best British Women's sprint result at WOC ever. Like many of her fellow athletes Alice combines full-time work with her orienteering and time and money are precious. The Riga race was rightly hailed as "a breakthrough performance".

After the European Championships I knew that I would be running the individual sprint at WOC. I was really excited this year as Riga city centre was finally terrain that I felt suited me - flat and fast, likely requiring quick decisions and with the potential to have some great route choices. As Graham Gristwood has since pointed out, also very like York city centre (where we had a brilliant sprint team training camp) with lots of tourist dodging and narrow alleyways.

I feel you learn something from every race that you do and, after two years of performances that I haven’t been satisfied with, I’ve gained a big bank of knowledge on the areas where my sprinting is weak! 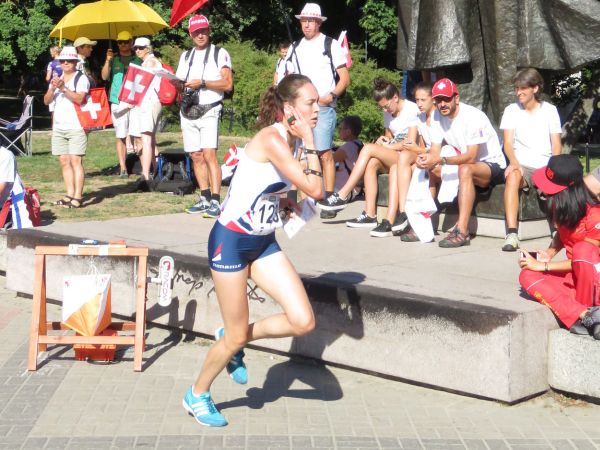 Photo: Alice in Qualification, by Maprunner

I love running and I think that it’s all too easy to focus on the areas of training that are enjoyable and neglect the ones that really need the work if you’re going to make improvements. Having already run 5km and 10km personal bests this year, I felt confident in my physical shape for a flat sprint and knew it was the technical and mental sides that I had to work on.

I spent the run up to the world champs focussing on these areas, forcing myself to plan ahead in training and really trying to teach myself good routines. It’s hard to replicate the pressure of a world championships so an important part of my final preparation was attending Sprint Scotland where there was a strong international field and multiple races that reflected the WOC programme.

Very rarely do I get nervous in the UK so this was brilliant practice. I ran really normal races and surprised myself to be mixing at the top of the results. This gave me a huge amount of confidence that if I just read my map and concentrate then I don’t actually need to do anything fancy to be competitive.

This less exciting side of training has also involved quite a lot of time looking at old maps of Riga, wondering around Google streetview, and team members planning courses for each other, trying to anticipate the challenges the planner might throw our way.

The sprinters came out to Latvia a couple of days before the competition to do our final preparations in as relevant terrain as we could. A couple of days before the race we were talking about WOC 2015 (our first world champs) and the absolute joy and excitement we had felt back then and it really struck a chord and made me remember that, yes ultimately we are here with a job to do, but also that we are here because we choose to put the work in day in and day out, and we only do that because we dream about living these exact moments that we were all about to experience. I think I had forgotten some of that. 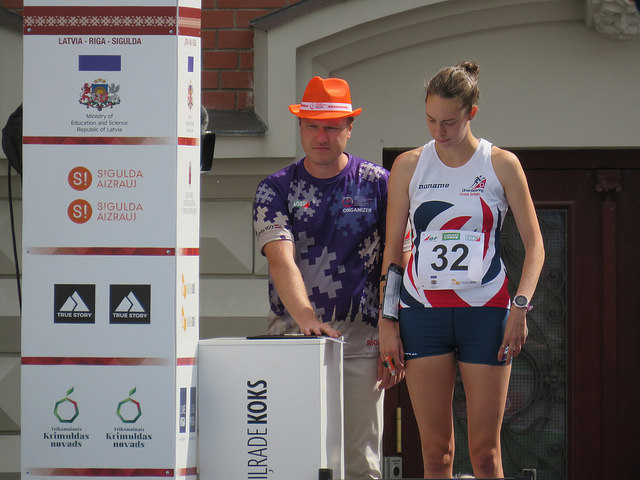 Photo: Alice on the raised dais of the start, by Maprunner

Usually I feel sick with nerves on the start line, but I felt really calm this year. Climbing up onto the start ramp and looking out over the arena I tried to take it all in, thinking ‘this is a moment I always want to remember’ and also ‘this is really really cool!’, and then focussed on reading my map and nothing else.

Liz Campbell has a photograph of me from the Poland World Cup in 2016 where I’m running through the arena passage and not looking at my map. That image has always stuck with me and I know that I don’t want to be that athlete any more.

‘Read your map’ was the only thought I had during the race and the only thing that I instructed people to shout at me going through the arena passage. It felt really silly and obvious as an orienteer to have to be reminded to read my map, but whatever works! 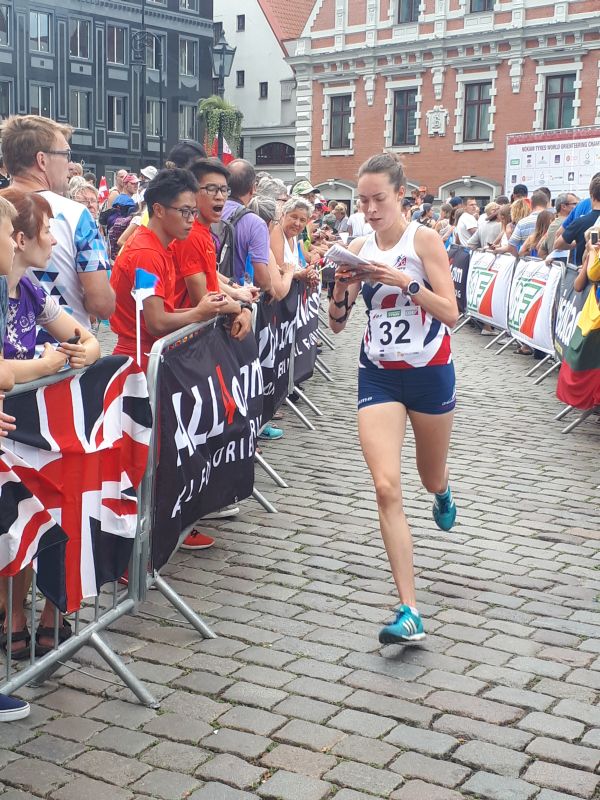 Photo: Alice Leake runs through the Town Square during the race, by On The Red Line.

I fought with myself throughout to stay focussed, to plan ahead, and to do a solid technical performance. I started slowly and wound it up in the second half of the race to make sure that I didn’t get too tired to make good decisions. I didn’t get stressed by all the people (or actually even notice them.) In fact I found it really fun and crazy weaving all over the place and zipping up and down the little alleyways

My race didn’t feel like anything particularly special but I was so so happy that I’d achieved my aim of navigating well. I didn’t have a clue when I finished that I’d just run the fastest time. I was confident of a top 20 if I orienteered really well but a top 10 was beyond even my wildest dreams and just blew my mind, as my ridiculous crying when I found out showed!

This GB team is a team that works really really hard and it could have been any one of us up there on our day. We all support each other and we’re all capable of being in the mix. I’m really excited for what we can achieve as we set off down the path towards the next sprint WOC in 2020 with belief, motivation and a pure love of orienteering to fuel the hard work.