The 2017 World Championships took place in Estonia from 1st - 7th July. The event was based in Tartu. The Championships were supported by Nokian Tyres. 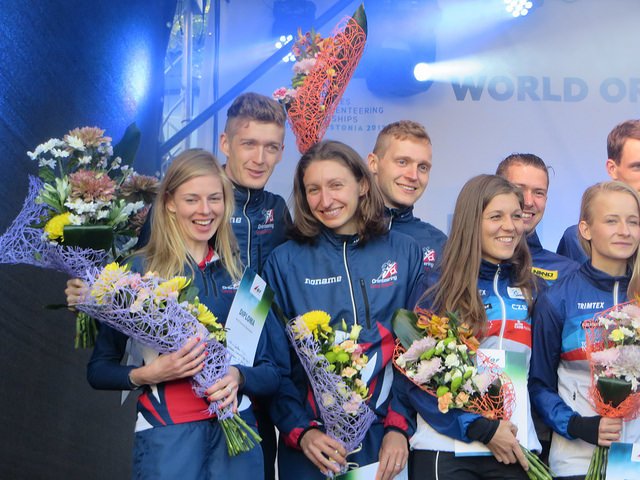 Britain sent a team of 16 athletes. They achieved one podium place, in the sprint relay.

Full results are at the Estonian World Champs site. A summary of British results follows below.

All six British athletes won through their heats to the finals. In the men's Daniel Hubmann of Switzerland won, with Frederic Tranchand of France second and Jerker Lysell of Sweden third. Peter Hodkinson was 13th and Chris Smithard was 14th. Kris Jones did not run the final. In the women's Maja Alm of Denmark was champion, with the Russians Natalia Gemperle and Galina Vinogradova second and third. Megan Carter-Davies was 28th, Jo Shepherd was 30th, and Alice Leake was 35th.

The men's long was won by Olav Lundanes of Norway, with Leonid Novikov of Russia second and William Lind of Sweden third. Ralph Street was 18th, Alan Cherry 25th and Jonny Crickmore 32nd. The women's long was won by Tove Alexandersson of Sweden, with Maja Alm of Denmark second and Natalia Gemperle of Russia third. Hollie Orr was 16th, Jess Tullie 17th and Charlotte Watson 25th. For all six British runners the result was a personal best for the WOC Long.

The men's middle was won by Thierry Gueorgiou of France, with Fabian Hertner of Switzerland second and Oleksandr Kratov of Ukraine third. Peter Hodkinson was 31st, Ralph Street 37th, and Will Gardner 58th. The women's middle was won by Tove Alexandersson of Sweden, with Marianne Andersen of Norway second and Venla Harju of Finland third. Jess Tullie was 15th, Jo Shepherd 18th, and Hollie Orr 32nd.