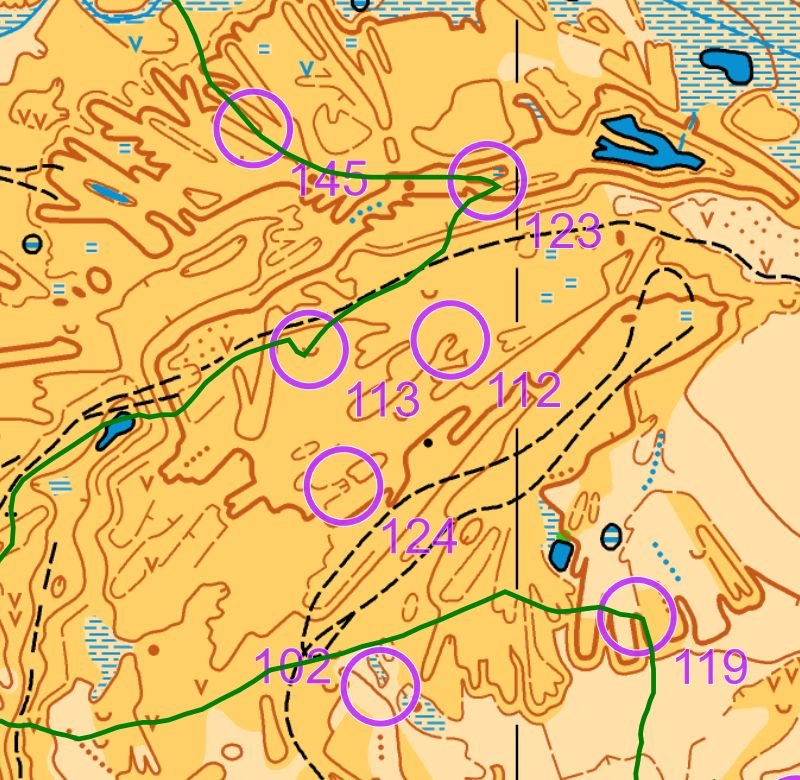 The "JK", the biggest annual festival in the UK orienteering calendar, held every year at Easter, is back and upon us. We really missed it in 2020 and 2021. This year the Welsh Association are hosting, and some of the areas used are the same as in 2014 when they previously hosted.. How's the winter training gone? Have you got everything planned out and have you read through 37 pages of programme? How did you fare on your big weekends in the Winter and early Spring? 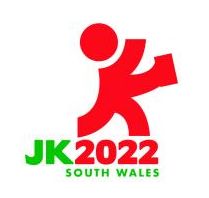 Remember it is a lot of people and cars on a busy holiday weekend. Your chances of having a good race and enjoying the orienteering, let alone enjoying meeting friends and spectating, can surely be improved if you allow plenty of time for travel.

Over the weekend there is a fair chance that any reporting by us will be via @OnTheRedLineO on Twitter.

As at the recent British there is GPS tracking of the elite classes, available after the last start.

On all three individual days the elite races are World Ranking Events..

The long races in M21E and W21E are always a big physical test, especially so for the men with longer recommended winning times (the times are set matching current international guidelines.) Coming immediately after the middle, and for many also the sprint, the weekend can be hugely demanding. Many runners will also turn out for the relays with their UK clubs, and sometimes with international clubs - this year the JK Trophy Relay and the Women's Premier have teams from Finland's Rajamaen Rykmentti and the Women's Premier has a team from Norway's Nydalens SK.

The Sprint is a self-standing event. JK "individual competition" is for the sum of time taken for the middle and long. The middle start list is set by World Ranking position (best last). The long start list is by results in the middle race (again, best last.)

JK Startlists (can be sorted by start-time.)

Thankyou to the clubs putting on the competition, and particularly to the people carrying the main roles of organisers, planners and controllers - their names are in the programme. Two squad members are amongst them; Megan Carter-Davies and Ben Mitchell are the sprint planners, and Ben is also the mapper for Clydach Terrace. He is entered for the long.

Note that it is not necessary to be a squad member to be selected to run in a GB team, nor does being in the squad of itself bring an athlete financial support.

Maybe not all will takeup their entries but it looks like all but one of the athletes on our squad summary page are entered for one or more races. Some athletes will run sprint, some forest and some both. It is the most significant domestic competition for those with international aspirations.

As well as the JK podiums, which are of course the main focus of the weekend, the individual races are selection races for representing GB later in the year.

The team for the World Universities in Switzerland is picked after the JK. These championships have sprint, middle and long races, plus sprint and forest relays.

For the GB senior team the first part of the 2022 international season is sprint focused. After the weekend, eight men and eight women will be selected for World Cup Round 1 in Sweden, which is the three sprint formats.

After World Cup Round 1, much smaller teams are picked for the World Champs - this year the three sprint formats, and the World Games - a sprint relay plus sprint and middle races.

Perhaps six to eight places for World Cup Round 1 have already been earmarked by strong runs in 2021 internationals (there is nothing official, but the selection policy is of course public). There are clearly places available for athletes who can perform near the top of the classes on Friday. It's perhaps not so likely that a junior could be amongst them, but the format allows it with 20's and 18's running the same courses as the 21's.

The season switches to forest formats in August, for the European Champs and then the World Cup Final Round. These are again larger teams (generally GB has six places for both men and women in the races.) As with top runs in the Sprint, top runs in the JK forest races will put athletes in a strong position for selection for these internationals.

It will be great to have a big weekend with so many of the athletes about, especially after there being no JK the last two years. It is the best chance of the year to connect with them. Leave them be before they run (although a few are fine with chatting) but they're almost all happy to talk after running. If you're very fit you might even be invited to join them for warm-down!

Custom suggests the squad athletes will wear UK club colours for the middle and relay (presuming they run with their UK club), overseas club colours for the long, and their favourite running vest or top - which could be almost anything - for the sprint. See what you can spot.

One of the best known names in the sport is running at this year's JK. The Swede Emil Wingstedt, who is working as a specialist sprint coach with the British Team in the run-up to this year's World Champs, is running some of the elite races. Emil has 7 World Champs medals and 11 European Champs medals. Here's his WorldofO summary page. 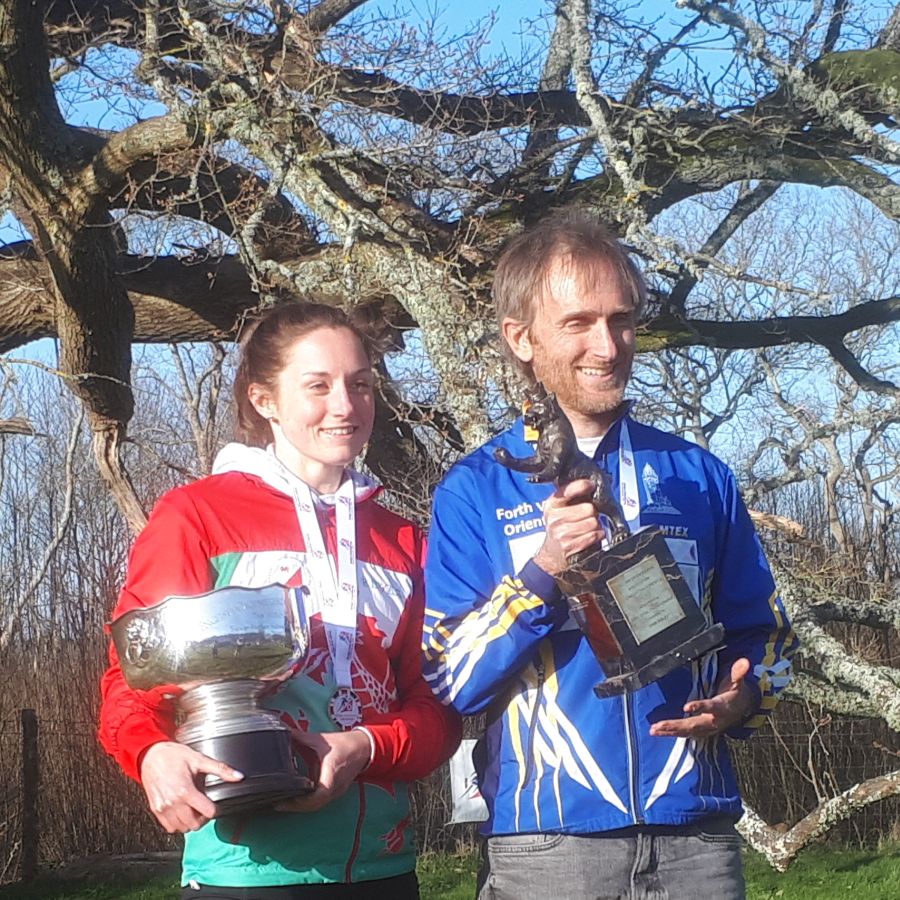 The British Long Champs were three weeks ago. On long courses in tough terrain and in warm weather the fields were stretched. Graham Gristwood and Megan Carter-Davies won by seven and five minutes respectively.

In the Middle Champs on the 6th March, Will Gardner and Alice Leake took the wins.

The other big race weekend was Sprint Scotland, 19th -20th March. Here Chris Smithard and Megan Carter-Davies headed the results, but there were several races and others also ran well. .

The final starters in the women's race, at one minute intervals, are Fiona Bunn, Jo Shepherd, Laura Robertson (New Zealand), Cecilie Andersen, Charlotte Ward, Grace Molloy and Alice Leake (who is at 15:20).

The final starters in the men's race are Will Gardner, Sasha Chepelin, Nathan Lawson, Chris Smithard, Jonathan Crickmore, Kris Jones and Peter Hodkinson (who is at 15;30).

The defending champions, from 2019, are Will Gardner and Megan Carter-Davies.

The area was used for the JK Sprint in 2014 when Peter Hodkinson and Tessa Strain (then Hill) took the wins. Kris Jones was the planner.

This year Kris is not running. In his absence On The Red Line see the men's race as open, and Alice as the most likely winner of the women's..

Clydach Terrace is the site of abandoned 19th-century ironstone workings characterised by a large number of finger-shaped tips. The detailed contoured hillside, combined with open moorland and few paths will provide testing terrain for navigation at speed.

The area was used for the Veteran Home International Relays in 2018 - link to map.

On The Red Line make Megan Carter-Davies the most likely winner of W21E.... and sees the M21E race as open.

For all competing at the JK today is the one day with a long course, but fewer than 5% of the festival's runners will be starting the longest courses for men and women. If the sprint and middle tend both to intense, pressured orienteering, the long is a much more extended affair, the dramatic challenge of endurance in wild terrain. For many it is the true orienteering: a long, physical, extremely challenging, and perhaps lonely experience in the great outdoors. For them this is the absolute highlight of the weekend. It embodies the very essence of orienteering - the runner taking sole responsibility for the success of the navigation with plenty of physical challenge. The runner has to find the way, and if and when something goes wrong, they have to sort it out.

These courses are, like the British Long Champs, even within orienteering, something a bit special, the longest big races in the calendar. (Pre-COVID the several Area Champs used to be Level A too, but they can now be Level B.) The race, especially if run at full race speed, is extremely draining even for the best-trained athletes. So maybe not everyone who starts will finish, and some may choose not to start. And the weather could always play a part as it has done spectacularly on other occasions..

The start interval is 3 minutes, with the order being the reverse of the previous day's times i.e. fastest last. So "trains" can be a factor on the day. Because the start is in reverse order of finishing time for the middle, a runner may find they close on runners in front, and the ones behind close on them. In races taking well over an hour this means groups form. Being aware of one another and knowing the value of being in a group for finding the kites, and being motivated by the running of others, groups tend to choose the same routes.

On The Red Line thinks this is the race least likely to produce a surprise - runners high up in the World Rankings (who started in the last slots the previous day) are there for a reason: they are very good at this sort of race.

After their clear wins at the British it would be brave for On The Red Line to mention anyone other than Graham Gristwood and Megan Carter-Davies as likely winners. But maybe someone who didn't run at the British Long can get close to Graham? Perhaps the candidates are Hector Haines, the 2014 JK winner, who last ran a JK in 2015, and who grew up by the open terrain of Ilkley Moor and now lives in the mountains of Sweden, and Will Gardner this year's British Middle Champion. 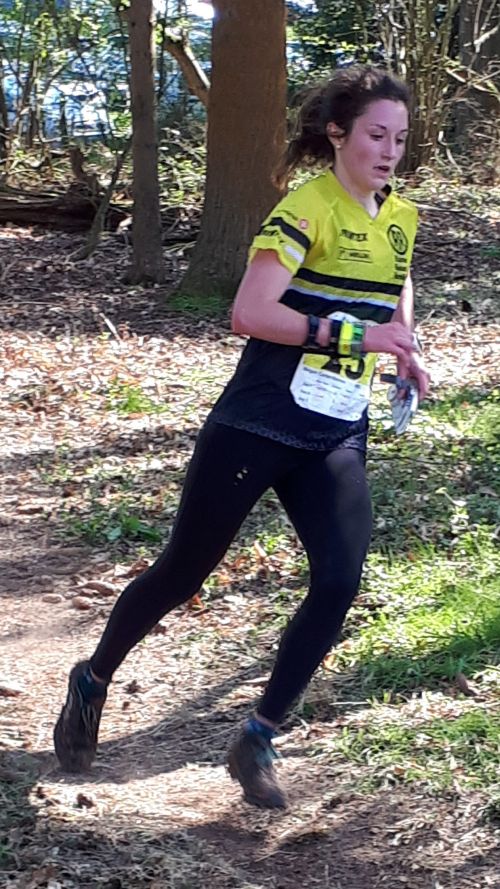 Megan Carter Davies at JK2019, in the colours of her Finnish club Rajamaen Rykmentti 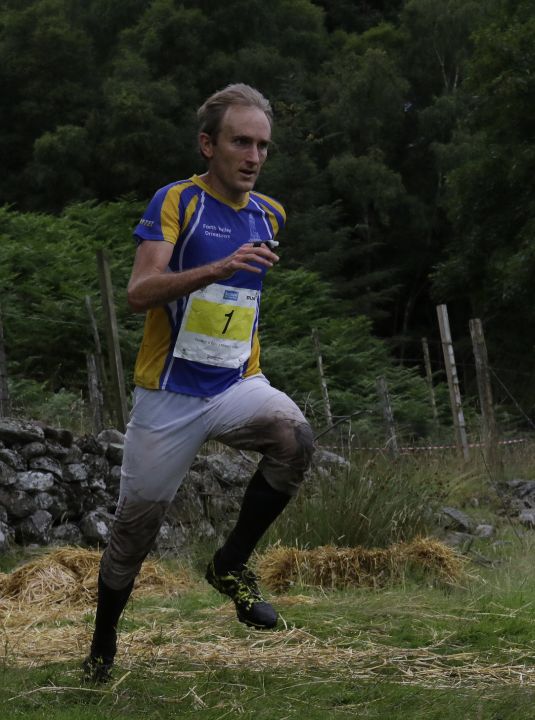 Graham Gristwood at the Scottish 6-day 2019 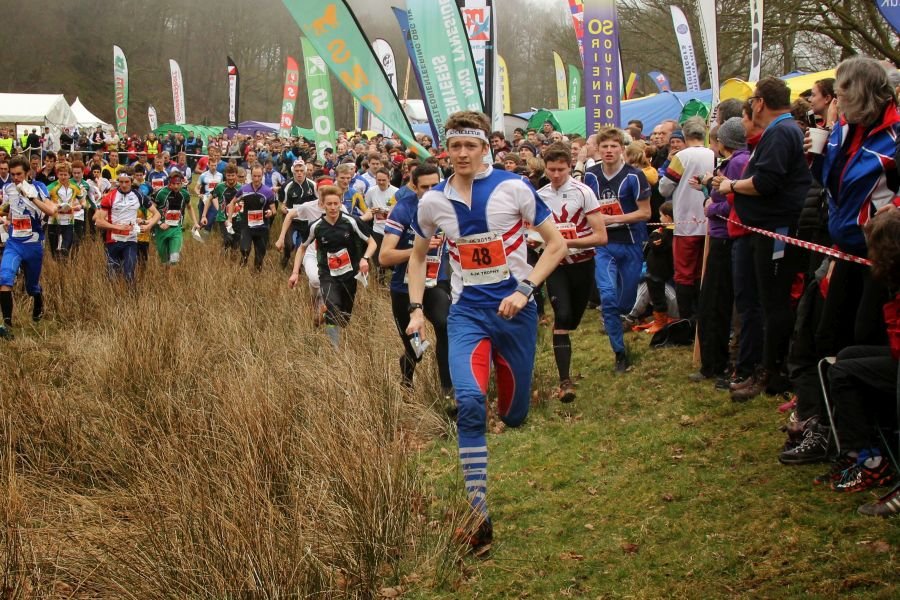 This year the racing is at the Caerwent Military Training Area. It may well feel more like a longish sprint relay than a traditional forest relay, firstly because of the area, and secondly because the guidelines are for quite short courses. 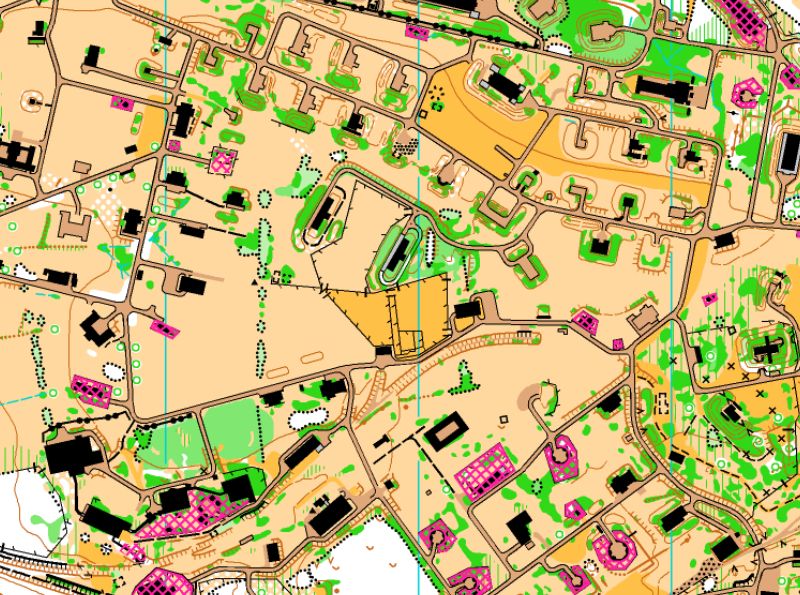 In many years it takes Forth Valley Orienteers or Edinburgh University or South Yorkshire rather less time to wrap up a relay win than it takes the winner to run a long course the previous day. 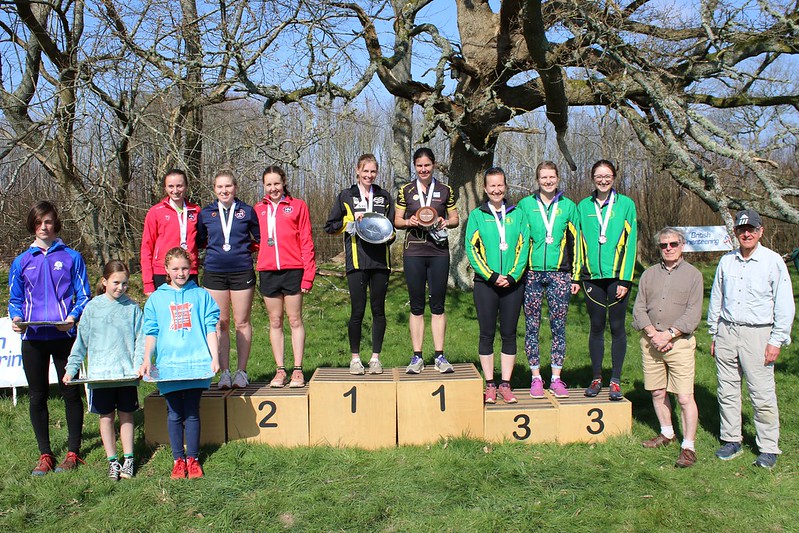 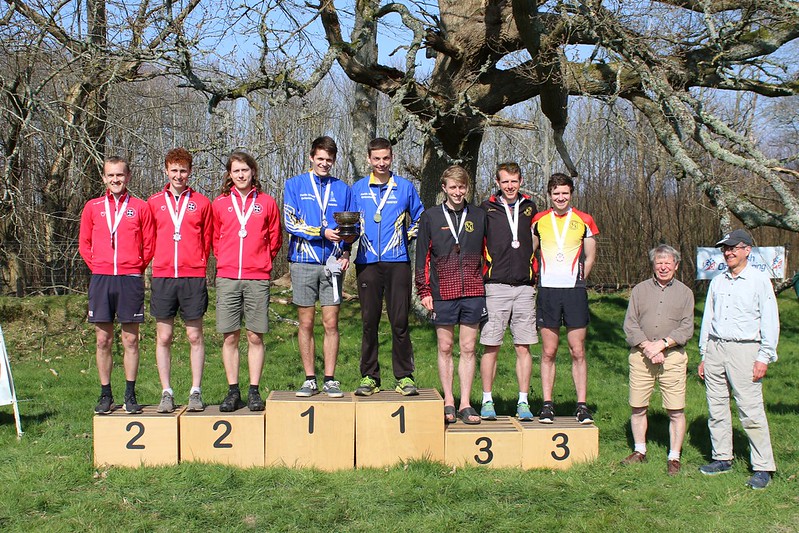