Euromeeting in Denmark was a runup event for the 2020 World Championships.

Not all countries sent full teams but plenty did, with a lot taking the opportunity to build their experience of competition formats at this level. It was good to see GB represented in strength.

On Friday 21st there was a Sprint Relay in Kolding. GBR-1 were ninth, fifth nation. GBR-2 were thirteenth. GBR-3 including a Swedish guest runner were 26th.

On Saturday there was a knockout sprint. Alice, Charlotte and Jonny got as far as the semi-finals. Cecilie got to the quarter-finals.

On Sunday there was a regular sprint race in the UNESCO World Heritage site of Christiansfeld. Alice Leake was 4th - a really good result. Charlotte Ward was 23rd. The leading British men were Jonny Crickmore 26th and Matt Fellbaum 27th.

You will know a Sprint Relay is about an hour long, 15km total running with four legs run in the order woman-man-man-woman.

This relay played out in a similar way to the World Champs Relay and will have been entertaining to watch.

Legs had several small gaffles with closely balanced route choices. (Nevertheless some of the gaffles will be slightly quicker and some slightly slower.) The early leg runners were very aware of other runners, and the impression is it would be easy to be tempted to slightly inferior routes by runners ahead, perhaps on the other gaffle.

At the end of leg 1 there was a continuous stream of finishers - 17 in the first minute.

Alice Leake, leg 1 for GBR-1, was around the front of the race all the time, including leading before the arena passage, and at the end was 4th, 16 seconds down on leader Maija Sianoja of Finland-1. Maija was one of two women to run under 14 minutes, the other being the final leg runner for the winning team. Swedish teams (they had five in all) were 2nd and 3rd after the first leg.

From the tracking Matt Fellbaum, leg-2 for GBR-1, suffered some misfortune right at the start of the second leg, and then ran to hold his position, finishing 12th, 53 seconds down on the lead. At the end of the leg SUI-2 shared the lead with SWE-1, 20 seconds ahead of quite a large pack.

Jonny Crickmore ran leg 3 for GBR-1, finishing 10th, 1:05 down on the leading team SUI-2. Anton Sjökvist (SWE-2) and Matthias Kyburz (SUI-1) both ran 14:24, the fastest man's time of the day, to bring their teams in second and third, 11 and 13 seconds down. SWE-1 and FIN-1 made up the group of teams in contention for the top places, with a gap now opened behind them.

On the final leg, Karolin Ohlsson for SWE-1 - the member of the Swedish World Champion team present - ran 24 seconds quicker than SUI-1's Martina Ruch and 22 seconds quicker than FIN-1's Anna Närhi to take the win. Charlotte Ward, last leg for GBR-1 picked up a place to finish 9th, staying ahead of Denmark, but remaining 20 seconds behind Austria. Great Britain were fifth nation with extra Swiss and Finnish teams ahead as well as two extra Swedish teams.

For the winning team, Lina Strand and Karolin Ohlsson will be familar names to those who follow international orienteering, but Max Peter Bejmer and Eric Börjeskog perhaps less so. Both are experienced relay runners being key members of top Swedish club teams, IFK Göteborg (TioMIla winners 2017, 2018, Jukola winners 2017) and Södertälje-Nykvarn (TioMila winners 2016), respectively. For Södertälje-Nykvarn, Eric has probably shared a relay handover with the British runner Ralph Street (now moving to a Norwegian club) at least twenty times over the last five years.

In each race there was a notable tendency for runners to choose the same route - so the whole of one quarter-final might go one way, and the whole of another an alternate route. It is not clear how much map reading was going on; if it's a choice between getting left behind and reading the map, and keeping up and not reading what do you do? Some runners were choosing to allow others to lead through the first part of a race, with the chance of conserving strength for the end, and perhaps also selecting a different route if an opportunity arose. 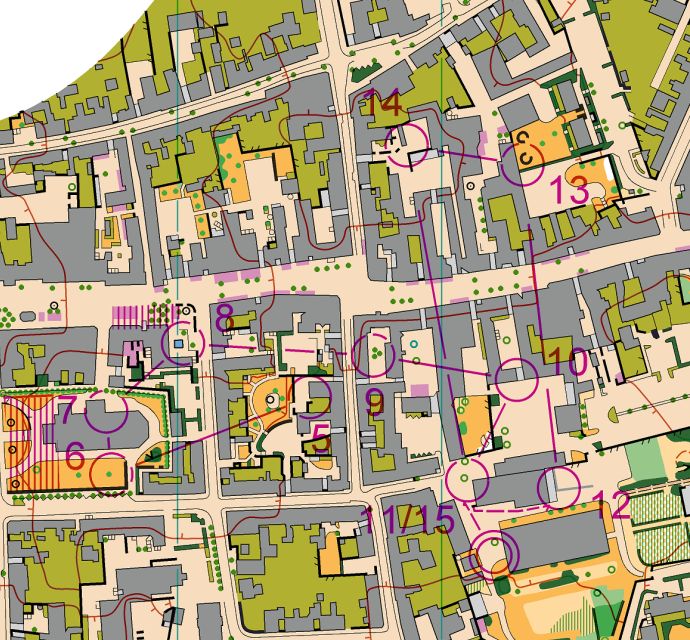 Second part map of the Finals

Matthias Kyburz of Switzerland won the men's, with the Swedes Isac von Krusenstierna (a final year junior) and Anton Sjökvist second and third. On the GPS tracking you can see Matthias Kyburz taking a better route very near the end, immediately after the arena passage. Of course he is also known for very fast finishes.

There is another Knockout Sprint on 4th October in the Final Round of the World Cup.

This took place on Sunday 23rd in the UNESCO World Heritage site Christiansfeld.

In the women's Karolin Ohlsson and Lina Strand continued their excellent weekend with the 1-2, Karolin's winning margin being 3 seconds. Amanda Falck Weber of Denmark was third and Alice Leake fourth, a really good result.

In the men's this year's World Champs Silver Medallst Tim Robertson of New Zealand also won by 3 seconds, with Yannick Michiels of Belgium second. Third place was shared by Aleksi Niemi of Finland and Christoph Meier of Switzerland.who were a further 21 seconds back.