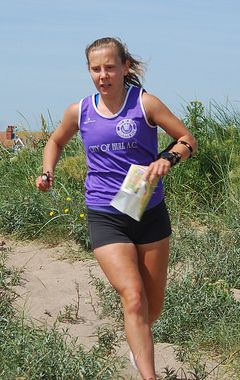 Charlotte Ward won the World Ranking (WRE) Sprint in Antwerp yesterday, with the field including athletes from several nations preparing for the World Championships. Teresa Janosikova (CZE) was second and Sigrid Alexandersen (NOR) third.

Kirstin tweeted a presentation picture of the three British women senior squad athletes mentioned above, with the Edinburgh-based New Zealander Laura Robertson (who was eighth).

Pleased with a top 10 finish in yesterday’s world ranking sprint @AntwerpSOM, finishing 9th in the world class field...even if I did fall apart in the chase 😖. Great to see my teammate @charlward92 take the win & @cdmegan in 5th. @OnTheRedLineO 🏴󠁧󠁢󠁳󠁣󠁴󠁿🇬🇧🏴󠁧󠁢󠁷󠁬󠁳󠁿 pic.twitter.com/IOmNARQzSA

There was a second sprint race on Saturday and a longer urban "City" Race today, Sunday.

Charlotte was sixth in the second sprint (Megan was second) and won the City Race (Megan was third) for an overall result of second, two seconds behind Galina Vinogradova of Russia - 69:24 vs 69:22. Megan was third. And Chris was fourth in the men's, with the same four athletes taking the top four spots in all the races, and Tim Robertson taking the overall win by three seconds from Frederic Tranchand.

Across all the age classes there were over a hundred British runners.