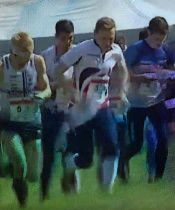 The European Forest Relays are on Saturday 12th May, with the women's race starting at 1pm UK-Time, and the men's at 3pm.

Each country may enter two teams in each forest relay.

GB has two teams in each, and of the 12 athletes nearly all are Scots or have strong Scottish links. In the women Hollie and Jo are Scots (and both are now members of Halden SK), Jess lives in the Highlands, and the other three all went to Edinburgh University.

In the men's one team could be "Scotland" with Ali and Sasha both from the Highlands and Hector married into the Highlands. In the other team Welshman Kris and Englishman Peter both now live in Scotland.

It is the same arena as the sprint relay used, in Tesserete, and the forest is said to be not so steep as others this week. There may also be some simpler transport legs between the arena and the forest.

So far this European Champs week there has been thunder, lightning and heavy rain at some time each day. Usually in the evening, but sometimes in the afternoon, and so far the EOC races have escaped the storms - they have had only good weather. Not so the accompanying public races, which on Wednesday had some finishers so soaked that hot drinks were being provided on the finish line. So the weather may just make for some spectacular pictures!

If you do watch on the internet note there is expected to be a presentation of teams 15 minutes before the race starts.

32 teams are entered - and they are numbered from 51. Apart from the GB teams, in terms of running better than their number, Switzerland start favourites and it might be worth keeping an eye on Austria number 66.

37 teams are entered. Switzerland are number 1 and are favourites. As usual there are plenty of other strong teams. Perhaps keep an eye out for Ukraine team 14 - the yellow shirts might well run better than that number.